It pet peeves me when people start blogs and then abandon them. I’ve kept checking friends’ blogs years after their last post, hoping the bug to journal publicly would bite them again. Now here I am, into eight months of not posting. There are many irrelevant reasons why, and I do write elsewhere, on a site that was fashionable in the early 2000s but whose community disappeared after Facebook and after my friends and I got careers or kids. I still interact with maybe a half-dozen people over there, but WordPress is like tagging air with invisible spray paint. The lack of feedback is demotivating.

I just read The Faraway Nearby, a new book by Rebecca Solnit, one of my favorite authors. It’s a memoir, but like a lot of her work, it’s as much about what she has read as it is about what she has done; it’s a memoir of stories themselves. She writes, “Like many others who turned into writers, I disappeared into books when I was very young, disappeared into them like someone running into the woods. What surprised and still surprises me is that there was another side to the forest of stories and the solitude, that I came out that other side and met people there.” Writing as solitary hobby never worked for me–every paper journal I tried to keep I shredded. Blogging was a revelation to me that I could run into the woods of my mind and find not mute flora and fauna but people who met me on the other side of my thoughts.

Speaking of solitude and forests, last week I was at a meditation retreat where the vow of Noble Silence extended to reading and writing. Not talking for a week is easy, but not writing is hard. On one hand, I get it–the whole point of retreat is to sink into direct experience, to watch your story without the identification with it that traps you in the suffering of desire and lack. At the same time, though, Buddhism couldn’t exist without stories–whether it’s the story of Siddhartha Gautama, the teachers’ anecdotes during their nightly talks, the narrative structure of the talks themselves, the story of my life and how I came to practice…

In a Vsauce video I can’t stop thinking about, Michael Stevens quotes Fernando Pessoa, who wrote, “Direct experience is an evasion, a hiding place for those without any imagination. To narrate is to create, while to live is merely to be lived.” ?! Pessoa is the anti-Buddha! My writing practice has made me realize I have the power to create my own story instead of being lived by one, but I’m also all too aware of the less empowering narratives in my mind that keep me anchored in the past.

Solnit says, “Stories are compasses and architecture; we navigate by them, we build our sanctuaries and our prisons out of them, and to be without a story is to be lost in the vastness of a world that spreads in all directions like arctic tundra or sea ice….We tell ourselves stories in order to live, or to justify taking lives, even our own…tell stories that save us and stories that are the quicksand in which we thrash and the well in which we drown.” One of the many oversimplifications we mislead children with is that humans only need three things to survive: air, water, shelter. We leave sex and stories off the list. Without the latter, there could be no learning and no memory (perhaps this is why no one remembers being a baby), but all those needs can kill us in large or contaminated amounts.

Babies must be perfectly mindful beings in that they perceive with direct sensory experience, unfiltered through story. I can’t help but think our “issues” (insecurities, neuroses) begin concomitantly with language acquisition. Stories like “I am ___ ,” “Life is ___ ,” “___ always happens” form as soon as we learn the words for them. I saw a graphic once that looked something like, “Yru’oe slitl albe to raed tihs.” It was from a study showing that as long as the first and last letters of words are the same, people can read them no matter what order in which the middle letters appear. I think this illustrates the danger of stories: what’s in-between our history and our future story (which is only ever desire or fear) becomes a jumble of letters we read according to some preconceived way regardless of what the content actually is. You see what you believe is there. This is delusion, the inability to be in the present moment and see it clearly for what it is.

Last year, I went to an event for mentors of new teachers. The speaker wrote a book on coaching and identified self-reflection and emotional resiliency as two strengths that help beginning teachers the most. When I was student teaching, we had to write weekly reflections for a methods class. At the time, I thought it was the only thing I was good at and that it was the least important thing to be good at. I felt like I was getting away with something when I wrote my Master’s thesis about vocational calling and teacher identity, using my blog as data. I understand now that reflection was the most important thing all along.

Self-reflection doesn’t come easy to everyone. This year, I read Anne Frank’s Diary of a Young Girl for the first time while teaching it to my students. I had no idea that 15-year-old Frank, before she died, went back and revised her journal entries, just in case they got published (she had heard on the radio that people were looking to collect personal accounts of World War II). I asked my students to keep journals while we read Frank’s and interacted with them by commenting on theirs. It always surprises me that this isn’t an easy assignment for all kids. Given the chance to be alone with one’s own mind, not everyone knows how to interact with it. Or this: the first journal I read on the first day of the assignment was about suicide, as if my speech about being a mandatory reporter had been an invitation to a cry for help. I once had a dream I was in my classroom, jumping up and down and shouting at my students, “Writing can save your life!” It was comical, but I believe it’s true.

At the mentoring event, the speaker read a poem called “The Way It Is” by William Stafford:

There’s a thread you follow. It goes among
things that change. But it doesn’t change.
People wonder about what you are pursuing.
You have to explain about the thread.
But it is hard for others to see.
While you hold it you can’t get lost.
Tragedies happen; people get hurt
or die; and you suffer and get old.
Nothing you do can stop time’s unfolding.
You don’t ever let go of the thread.

Solnit uses the metaphor of thread, especially red thread, to show how narration creates and how stories connect us, but her most original and beautiful metaphor is this: “I am, we each are, the inmost of an endless series of Russian dolls; you who read are now encased within a layer I built for you, or perhaps my stories are now inside you. We live as literally as that inside each other’s thoughts and work, in this world that is being made all the time, by all of us.”

I’m not writing to hear myself talk here (well, maybe a little). I’m throwing you a red thread from the other side of the forest. I want us to live inside each other like Russian nesting dolls. It’s as intimate as that. 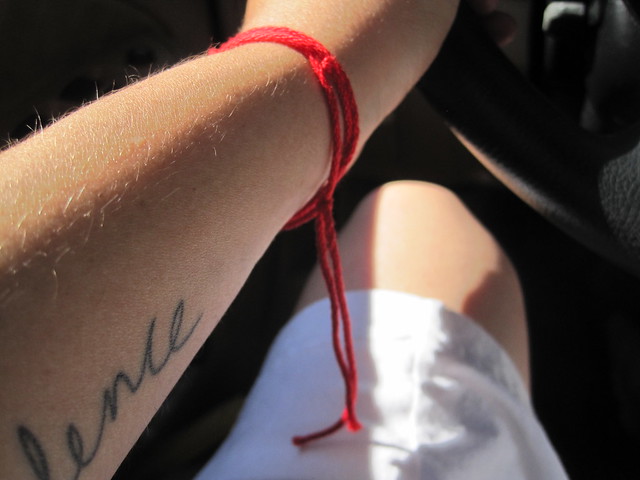 Thoughts on the things that keep us afloat.

A resource linking land and community

trying to learn as I go

The Black Man on Campus

Doing the knowledge on teaching, education, culture, and society

Adventures in the continuing education of a teacher

Get Out and Ride!

Episodes in the Life of a Hand Bookbinder

A site to discuss better education for all